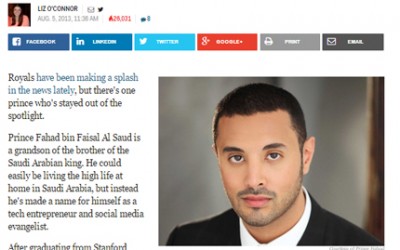 Article on the Business Insider

Royals have been making a splash in the news lately, but there’s one prince who’s stayed out of the spotlight.

Prince Fahad bin Faisal Al Saud is a grandson of the brother of the Saudi Arabian king. He could easily be living the high life at home in Saudi Arabia, but instead he’s made a name for himself as a tech entrepreneur and social media evangelist.

After graduating from Stanford with a degree in Mechanical Engineering (and a double minor in Management Science and Middle Eastern Studies), Prince Fahad was hired as the Head of User Operations for Facebook Arab, where he helped launch of Facebook in Arabic in 2009.

“Facebook is the reason I’m not going for an MBA right now. Facebook was my MBA. Facebook was my PhD,” said Fahad in an interview with Business Insider. “[Working at Facebook] was the most educational opportunity I ever could have asked for. It was amazing to be working on a project that could change people’s lives.”

And change lives it did. Since the dawn of the Arab Spring in late 2010, there’s been much talk of the role that social media, particularly Facebook, has played in various revolutions across the Arab World. But Fahad sees Facebook as a vehicle for social change rather than an independent force. “Social media is a tool,” he said. “It’s no different than the telephone, the television, a hammer. But it has forced a lot of people to be more transparent and to be held accountable for what they say.”

He also sees social media as helping to drive job creation in the Middle East and around the world. “It gave a lot of people opportunities for work, creation, innovation, startups. We have a huge generation of entrepreneurs who wouldn’t have had that opportunity without these social networks,” he said.

Since leaving Facebook in August 2011 he’s also helped found several tech startups, including Na3aM Games and Appiphany. Na3aM (New Arabic Media) focuses on creating multi-platform games with an Arabic twist. “We wanted to create content that focused on our identity and culture as Arabs,” said Fahad. “It’s a great feeling to be proud of something that you have contributed to and that has helped to empower the region.”

Appiphany makes slick apps that are like catnip for social media junkies. One of their most popular apps is InstaFeed, a program that allows Instagram users to divide the friends they follow into specific “channels” that can be turned on and off.

He also invested heavily in Popover Games, a maker of cross-platform social-casino games, where he helped to develop a auto-translating chat program that allows players of different languages to communicate via gaming.

“At Popover we wanted to create heritage games, games have been played for centuries and generations around the world but that weren’t available to play on Facebook,” said Fahad. “The idea was to help communicate cultures and break down language barriers by letting people play games that are culturally significant for them with other players around the world.” He eventually became a co-founder and saw Popover Games sold to casino games-developer Playsino last year.

Fahad currently lives in Los Angeles and consults for the Saudi government on cyber-technology and youth-oriented programs as the Foreign Ministry’s Head of Student Affairs, a job he says has been a natural fit. “After being the head of Facebook in Arabic and having that experience, it felt very natural to be asked to advise, especially after things happened with the Arab Spring,” he said. “I’m very happy.”

He’s just turned 30 and he’s a veritable expert on technological growth in the Middle East, but he has a refreshingly funny and youthful attitude. When asked where he would like to see himself in ten years, he said (without a twinge of sarcasm) that he hopes he can have a penthouse on Mars.

But he also hopes to see the Middle East back on top: “In 10 years I want to see countries in the Arab world back in their rightful place as a global leaders and contributors,” he said. “There’s an opportunity for me to jump between different industries and I hope to play a part in re-introducing the Middle East to the world in the right way.