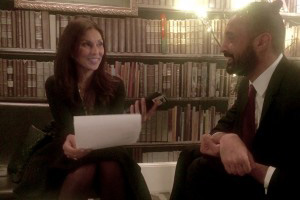 Female entrepreneurship is surging globally. Yet there are areas of the world where aspiring businesswomen are prevented from realizing their economic potential because of barriers to entry rooted in prohibitive cultural norms. More often than not, countries in the MENA region (Middle East and North Africa) are quickly classified as inhibitors of women’s progress. But, the heart of the MENA region, the Kingdom of Saudi Arabia, is paving a different path of progress for women and one man in particular is working hard to shift the narrative from the unequivocal “no” to a resounding “yes” when it comes to women’s empowerment. His Royal Highness Prince Fahad Al Saud, social entrepreneur and CEO of NA3AM Games, has made it his mission to advocate for equality through Technology by launching a gaming platform that champions, fosters, and celebrates Arab identity with a focus on empowering women and girls.

As an Arab man, and one of privilege by birthright, Prince Fahad has a myriad of opportunities available to him and which he can pursue. When asked about his motivation behind launching NA3AM Games to help women shatter the glass wall in Saudi Arabia, indeed globally, he explained, “This is my responsibility. As someone who was raised by strong women, I want to represent them through the work that I do. I have a mother, sister and female cousins and it is my responsibility to utilize my blessings for those who don’t have a voice.”