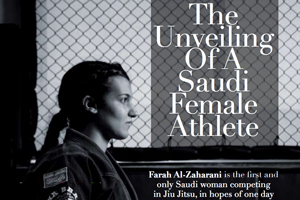 Earlier this year, the NA3AM team had the opportunity to accompany Saudi Arabia’s first female jiu-jitsu fighter, Farah al Zahrani, to Lisbon to watch her compete in the European BJJ championship. Read the article in Arabic.

Part of NA3AM’s mission is to unlock and inspire Arab talent and creativity and as such, NA3AM is delighted to see Farah’s endeavors covered by media outlets in the region and beyond. Today, Living Well Magazine, one of Jordan’s premiere lifestyle publications, published a featured article that includes an interview with Farah and an overview of her career thus far.

The article elaborates on Farah’s hopes for herself and other Arabic women in sports as well as her journey with NA3AM. Challenging deeply-held stereotypes and objections is a long road and it starts with making a commitment. We at NA3AM are pleased to see Farah’s commitment slowly materialize and shape a better future for Arab women in sports.

Farah is part of our NA3AMBASSADOR program, learn all about NA3AM’s social impact mission here.