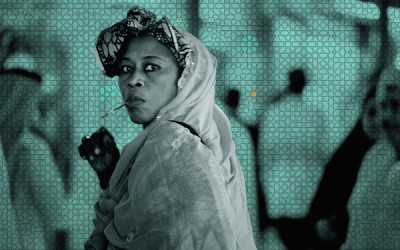 As part of our artist series, NA3AM spoke with Saudi Arabian Reem Al Faisal. Sprung from her native Saudi culture and history, this artist’s craft is a way for her to showcase God’s glory in its many formats across cultures and countries.

Photography is one of the rare mediums that can traverse the line between profound and simple and still deliver a potent message. Saudi Arabian photographer Reem al Faisal is no stranger to delivering such messages through simple photographs. Her work started as an internal dialogue, admiring God’s wonders and the sense of divine within each of us. As she travelled and saw more of the world, certain commonalities started appearing. In a world where modern art is seen as mostly unrelated to religion, Ms. Faisal’s work is a refreshing perspective that captures mankind’s relation to higher power.

Despite using different names to describe “God,” the sense of an omnipresent divine is apparent in Ms. Faisal’s photographs. Using an understated, often Black and White background, Ms. Faisal approaches her setting with the eye of an impartial observer. Never wanting to seem voyeuristic or attract necessary attention, she captures simple moments that seem profound once looked at in stills. Faith and spirituality intertwined in the most creative, yet simple, of minds.

Ms. Faisal’s process is akin to that of a gatherer; one wanders without knowing wether the right subject, setting or photograph will be found. Luck surely plays a part but what it comes down to is her uncanny ability to translate the mundane to the profound. Perhaps the B&W background forces the viewer to adopt a keen and somber eye to spot small details, or the often-simple juxtaposition between people, objects and nature; either way, the effect is potent and hard to miss. When asked about this, Ms. Faisal is undeterred; she points to the Japanese mantra of doing “more with less” and attributes her style to trying to do exactly that.

When one looks at Ms. Faisal’s entire body of work, certain themes stand out. Without telling you what they are (that would be no fun — we want you to have a look for yourself!), a certain sense of the absolute becomes clear; a universal key that is divine and human. People- Arabs or otherwise share countless similarities in how they approach the divine as well as each other. Taking a look behind cynicism, one uncovers a world larger than our metaphysical one; one that is built on an omnipresent force that Ms. Faisal does a great job of capturing.

At the end of the day, we all know that art transcends countries and cultural barriers, but rarely do we let this notion truly change our behavior and outlook of others. Why? Ms. Faisal is adamant that it is the duty of the artist to give hope; to shed light on a universe larger than our immediate one. At its best, her work is a visual description of a universe that is more similar than it is different. It is a stoic take on a cynical world, hoping to instill a sense of togetherness under divine pretenses.

Follow Ms. Faisal’s work on her site and on social media.