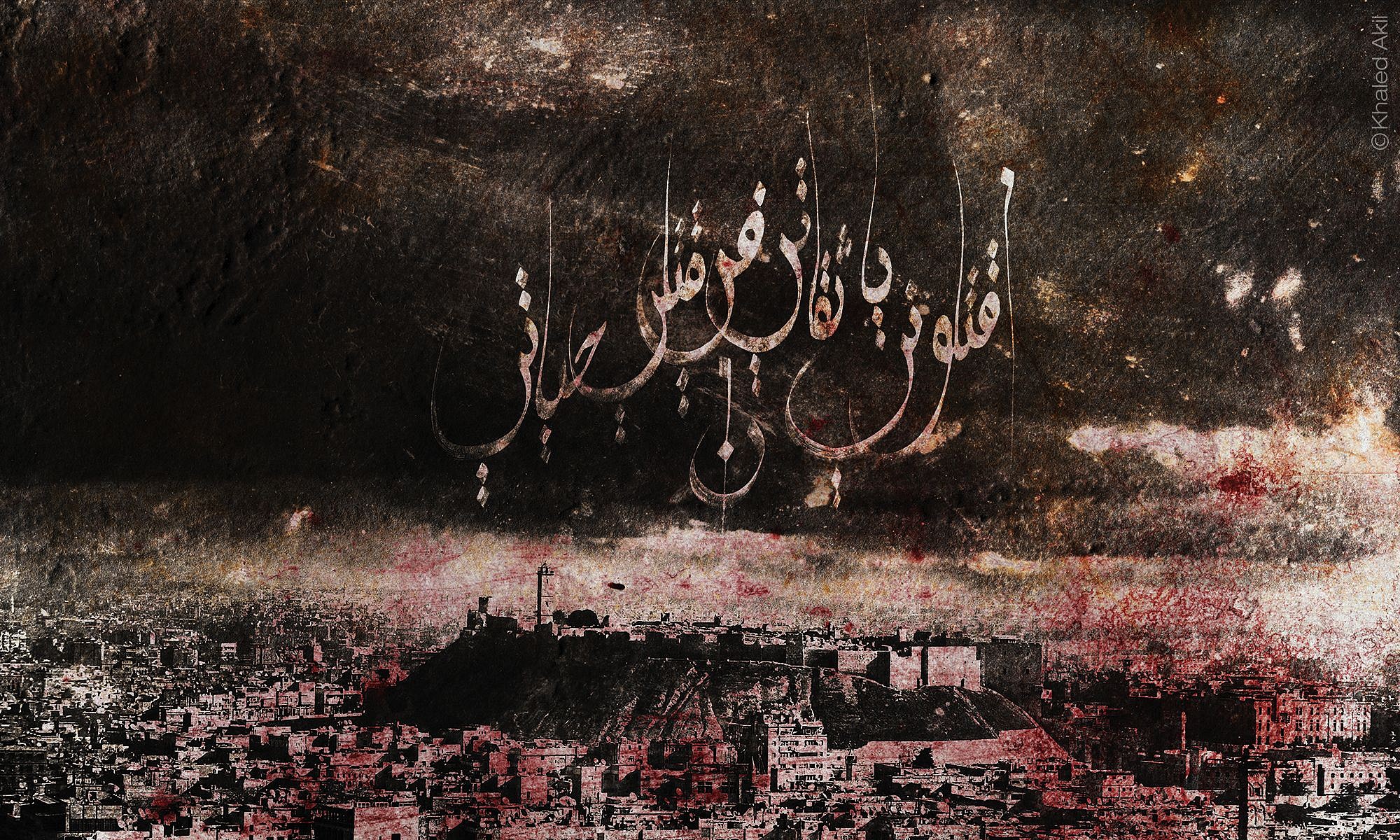 A great deal has been written about the Syrian crisis, its vast human toll and numerous repercussions on the world. With that, there has been little reporting on how this tragedy, followed by the en masse resettling of millions, has affected the hearts and minds of artists in the region.

Hailing from Aleppo, Syrian artist Khaled Akil has documented his experience in the country before and during the crisis. Witnessing Aleppo, one of the world’s earliest settlements, experience the worst of all tragedies dictates certain themes in his work. A rousing pas de deaux between nostalgia and tragedy, his art is anything but light. It is honest, dark and leaves the viewer with more questions than answers.

In his show Legend of Death, Akil uses select topographies and locations as artistic canvases to paint an updated version of bloodshed and war. The decay of a culture exemplified in red and black brushstrokes. The maps are edited to reflect the reality of war and the breakdown of an entire civilization. He uses a mix of photography and painting and layers both mediums to create bold, moving pieces. It is emotionally charged and potent.

Akil’s work seeks to transcend stereotypical media representations of the crisis; it addresses it honestly as a tragedy of epic proportions. It explores the state of affairs (or lack thereof) in Syria today, complicated with the question of a divided country. The exhibition reflects the geographical and grim human reality of Syria today and pays special attention to the destruction it has caused to Aleppo and larger Syria. At best, it is a nihilistic transformation; at worst, it is the destruction of the world’s oldest civilization.

The skyline of Aleppo and various Mesopotamian effigies are present in Akil’s work, perhaps signifying the increasingly large divide between what Syria was and what it is today. In speaking with NA3AM, Khaled stresses the importance of honesty in his role as an artist—he doesn’t want to merely report on news and events, he wants to portray his truth in a raw and unfiltered way. If it happens to be dark, so be it. When the story of Syrian women being held as sex slaves by ISIS came out, Khaled used his art as a way to shame the international community for its lack of response.

With the current state of affairs in Syria and the country’s tragedies coexisting on many levels, Khaled seeks timelessness through his art. It is easy for a foreigner to know Syria just by the images she sees on the news or on social media; completely overlooking its vast and rich history as the cradle of civilization. In Requiem for Syria, Khaled uses a poignant mixture of birds, traditional dancers, calligraphy and blood to tell a story. Exactly what kind of story? Khaled leaves it to the viewer to decide.

The individual elements of Khaled Akil’s work—humans, birds, social injustice, topography and calligraphy— are mere symbols when portrayed by themselves. As a congruous whole, they are emotionally stirring, evoking a strong sense of truth (albeit tragic) about Syria and its future.

When asked about the state of art in the region, Khaled doesn’t hold back: he wishes there was more support in terms of teaching the craft and patronage for new Arab artists. Most of the region’s renowned artists today have gotten to where they are despite of the region’s structures, not because of them. His advice for Arab artists is to remain honest to their subject and look beyond the present; he urges them to take a long view of art and humanity.

At its best, “art should provoke, disturb, arouse our emotions, expand our sympathies in directions we may not anticipate and may not even wish.” In that sense, Akil’s work checks all of the above and more. Follow his work at www.khaledakil.com and stay tuned for more NA3AM coverage of artists in the region.